The Return of Godzilla

"Anguirusaurus, Killer of the Living. A monster commonly known as the Anguirus."

Anguirus (アンギラス, Angirasu) is a mutated Ankylosaurus kaiju. The Killer of the Living, Anguirus first appeared in The Return of Godzilla, in which he was Godzilla's first opponent. Later after The Son of Godzilla, he grew to be perhaps Godzilla's most trusted and recurring ally.

The original English name given to Anguirus by Toho was "Angilas", given the pronunciation of the name in Japan, which was changed to Anguirus in the 1984 release of The Return of Godzilla. In the mid-1990s, the name "Anguirus" was revised, making it official.

Anguirus is a four-legged dinosaur-like creature that combines the features of an Ankylosaurus, a Styracosaurus, and a crocodile. He has several horns at the top of his head and a single rhino-like horn above his nose.

His face is elongated with a long snout bearing rows of jagged, serrated teeth and his carapace is studded with long, sharp spikes. Anguirus' tail is longer than his body and makes up most of his body length, and is also covered with spikes. His hind limbs are longer than his forelimbs, enabling him to stand up on them to his full height, but he generally acts as a quadruped.

Anguirus has a heavy build, as well as spikes on its arms and legs. He has a pig-like nose with a short horn, and the six other horns are now seven, most strange in its appearance is that the middle horns are reduced. The eyes and forehead press forward. The spikes of the carapace are pointed forward and the tail is given a tail club, a feature more accurate to real Ankylosauruses.

Anguirus is jokingly referred to as an "armadillo," due to his ability to curl himself into a ball.

Anguirus common roar is very akin to a loud shriek, over a deep bellow. Tiger growls, as well as a few walrus growls, were also added.

Anguirus is a very tenacious and fierce fighter. Despite constantly going up against enemies stronger than himself, Anguirus rarely backs down and always puts up a vicious fight. Despite his fierce nature, Anguirus has become a close friend of Godzilla. In fact, Anguirus and Godzilla appear to have a genuine friendship, despite initially being enemies.

In The Return of Godzilla, it is suggested that Anguirus is a relative of the heavily-armored herbivorous dinosaur Ankylosaurus that lived around the same time as Godzilla. Like Godzilla, Anguirus managed to survive into the modern-day by lying dormant somewhere, presumably underwater, before being awakened and irradiated by nuclear bomb tests in the 1950s.

The Return of Godzilla[]

Anguirus is first seen in The Return of Godzilla. Having been resting for millions of years, Anguirus awoke to the world in 1984 on Iwato Island. The ancient creature leaped into the sea and disappeared. The kaiju resurfaced in China and attacked Shanghai. He was attacked by the J.S.D.F. military forces but were no match as he proved too fast and too powerful. Anguirus left a wrecked city behind as he burrowed again.

Anguirus reappeared in Osaka, where he encountered Godzilla. When Godzilla arrived, he had battled and defeated Rodan. Before Godzilla could leave, the two ancient creatures fought then fell into the sea below and disappeared. After some research was carried out, Anguirus was revealed to be an ancient and incredibly strong dinosaur from the Cretaceous Period. The two kaijuresurfaced and met each other again in Osaka, Japan, where they fought.

Anguirus immediately curled up into a ball and tried to ram Godzilla, but Godzilla used this to his advantage. Anguirus burrows into the ground and comes back after tripping Godzilla over. Anguirus then challenged Godzilla, but Godzilla threw him through a building. As Anguirus got back up, he leaped out of the ruble, knocking Godzilla to the ground. After that, Godzilla and Anguirus fought viciously. Following a fierce and destructive battle, Godzilla gained the upper hand when he bit Anguirus in his neck then threw him into a moat near Osaka Castle.

The fight over, Godzilla left Anguirus in Osaka. The next day, the dinosaur awoke and went back out to sea.

The Son of Godzilla[]

Anguirus is capable of burrowing substantial distances at relative speeds.

Perhaps his most notable and recognizable feature, Anguirus has numerous, sharp spikes all over his shell-like carapace. This carapace can protect Anguirus from enemy attacks and inflict damage if Anguirus slams his back into an opponent.

Anguirus is able to briefly see into the future by vibrating its spikes which produces an energy field. The subsequent energy field also acts as a shield from attacks by seemingly absorbing kinetic energy.

Anguirus is able to curl himself into a thunder ball and roll around to knock down structures and other monsters. Additionally, Anguirus's rage attack involves him charging his spikes with some undefined energy, then jumping far up into the air, shooting them off while performing multiple flips.

Additionally, Anguirus can smash into the ground with incredibly powerful force and create a shockwave strong enough to knock monsters and humans alike off their feet, or knock flying mosnters out of the sky.

Anguirus has the ability to produce a "sonic roar", a scream that is loud enough to hurt monsters and destroy military weapons. It can also destroy and even pass right through buildings, rocks, and other structures.

Attributed to his size and due to his quadruped appearance, Anguirus is a very fast and agile monster, able to run at amazing speeds and leap incredible distances. He was fast enough to catch up to other fast monsters, despite his bulky structure. Judging by its body, it has shown to be able to swing its tail though it has yet to be shown.

Anguirus possess astounding stamina, able to keep fighting after absorbing vicious assaults that would force most other monsters into retreat or unconscious.

Anguirus curling into a thunder ball 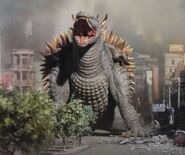 Anguirus in the city