Antlar (アントラー, Antora), also spelled as Antrer, is a powerful ant/beetle-like kaiju. First appearing in the two-parter Season 2 episode The Magnetic Beetle, Antlar terrorized the civilization of Baradhi thousands of years ago until it stopped and defeated by Ultraman, Ultraman Noa, and a past Godzilla.

Thousands of years later, Antlar returned to exacts its wrath upon the world only to be defeated by Godzilla, Gomora, Ultraman, and Ultraman Max in part thanks to the Stone of Baraj left by Ultraman Noa.

"Though the beast of Baraj has been defeated, the powerful Antlar shall return, rising from the darkness of the underworld to bring forth destruction upon mankind. Should he return, the red and silver giant will descend from the skies, the Monster Prince will ascend from the Earth, and the King of the Monsters will rise from the seas, all to stop Antlar."
— The prophecy of Antlar's return

Antlar is a powerful beetle-like monster that ruled over the desert of Baradhi, terrorizing its city. Approximately 4,000 years ago, Antlar rose from the underground to destroy the city but was stopped by a past Godzilla, Ultraman, and Ultraman Noa. However, a prophecy foretold that the insect monster would again return when mankind threatened the planet with pollution and destruction. The prophecy came true exactly four-thousand years later as Antlar arrived in Japan.

Godzilla The King of the Monsters[]

While a lone Kamacuras was flying over a desert region, the incest was ambushed by the monster Antlar, whom had dug an antlion-like hole in the middle of the desert. The giant pray mantis tried attacking the massive insectiod monster, but Antlar's rough hide was impenetrable by far and proceeded to fire his magnetism ray from his mandibles, sucking in The stray Kamacuras into his pincers, crushing the bug and then Antlar burrowed away.

Suddenly, one day, Antlar returned, attacking the City of Baradhi. But then, Godzilla appeared and confronted the beetle. As the roared at one another, then marched into battle and fought to a standstill. Then Antlar used his Magnetic Beam on the Monster King and lured him into his pincers, choking him.

However, Rei appeared and summoned his Gomora and both Gomora and Antlar fought hard and brutally to a standstill, trading blows. But when Godzilla recovered, both Godzilla and Gomora fought Antlar and as they had him in defeat, Antlar burrowed away and escaped.

Four days later, Antlar returned in Tokyo, attacking the city with his magnetic beam with little to nothing that GDF could to stop it as Antlar left to rest. Ultraman Max appeared to fight Antlar himself. It seemed the two were evenly matched until Antlar used his magnetic ray to his advantage on Max, attacking him with a transformer and even blocking his Maxium Cannon.

The Original Ultraman himself showed up to face Antlar, but the giant was tricked countlessly by Antlar's burrowing and his magnetic ray to reel Ultraman in. Ultraman managed to fight back and fired a Specium Ray, but Antlar's exoskeleton was too tough and the two continued to fight.

As Antlar had both of them in defeat, Godzilla and Rei, who summoned Gomora, who both followed Antlar from Baradhi, appeared to help. All four of them went against Antlar, but realizing Ultraman was running out of time and once Rei brought out the Stone of Baradhi itself, he put it in Litra's feet and ordered her to drop it on Antlar in hope of destroying it.

As soon as she did, a shower of sparks erupted from all over Antlar's body, greatly weakening the monster enough for Gomora however transformed into Reionic Burst mode and viciously attacked Antlar, tearing off its pincers. Greatly weakened by his monster's state, Godzilla, Gomora, Ultraman, and Ultraman Max attacked with their energy beams and defeated Antlar, ending its life and destruction.

Antlar is a giant, bipedal, insect-like monster. He has large pincers on his mouth.

Being an ancient kaiju over four-thousand years old, Antlar is a powerful monster, in fact, one of the most powerful to appear in the series. It was able to fight Ultraman Max, Gomora, Ultraman, and even Godzilla to a standstill. It took their combined strength (with small aid from Litra and the Baraj Stone) to defeat him. 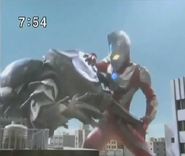 When resurrected by Geronimon, Antler gained a new set of abilities. 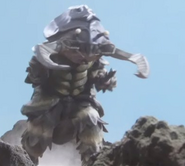 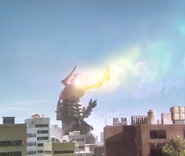