Arstron (アーストロン, Aāsutoron), or Earthtron, is a dinosaur-like kaiju. A ferocious, powerful reptilian monster with a cranial horn atop its head, Arstron is a force to reckon with. Arstron made itself known when it appeared mysteriously on a mountainous zone and unleashed his wrath on a nearby village.

Arstron first appeared mysteriously in a mountainous region without warning or origin, attacking a nearby village and setting fire to the homes with his Magma Ray. GDF arrived shortly after the monster arose, attacking the beast with their cannon fire but to no avail. Arstron continued destroying the village.

Godzilla: The King of the Monsters The Series[]

Like Gomess and Jiras, Arstron resembles Godzilla, basically looking like a bipedal dinosaur with the older theropod dinosaur reconstructions. Dark-colored body and yellow eyes, he also has a forward curving horn on top of his head.

Arstron's roar is a sped up Gyaos roar and some of his screams might be modified pig squeaks.

Arstron is a powerful, gigantic monster from the Earth and a force to reckon with. 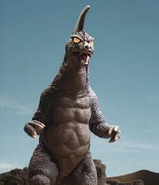 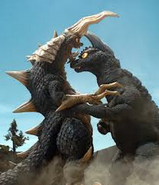