Bemstar (ベムスター, Bemusutā) is a space alien kaiju that absorbs, or devours, energy through his stomach. It is another one of the most powerful, most destructive, nightmarish, and monstrous beast of the monster world. It first appeared in the Season 2 episode, The Energy Eater has Arrived.

Bemstar was an energy absorbing monster from the Crab Head Nebula. It came into the solar system looking for cosmic energy.

Godzilla: The King of the Monsters The Series[]

The Energy Eater has Arrived[]

After leaving the Earth, Ultraman Hikari was ambushed by a stray Bemstar. Hikari and the monster battled around the astroid belt, eventually taking their battle to small, deserted moonlike planet. Bemstar was easily winning by beating down and injuring Hikari as he could only watch as Bemstar moved in for the kill. Just then, Zoffy arrived and after some motivational words were given to Hikari, The two ultras joined forces and Hikari eventually manages to destroy Bemstar.

Another Bemstar was seen flying overhead towards Earth.

Bemstar is one of the most powerful, most destructive, nightmarish, and monstrous species of beasts known to man to exist. It was powerful enough to battle three Ultramen, as well as Gomora and even Godzilla. It took the combined powers of Godzilla, Anguirus, Gomora, Litra, and Ultraman Mebius, Taro, and Jack to stop him.

When it was resurrected by Geronimon, Bemstar got a new selection of powers and abilities. 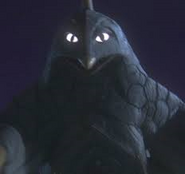 Bemstar on a Misty Planet 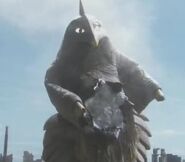