The Monster of the Blue Sphere

The Monster of the Blue Sphere

Bemular (ベムラー, Bemurā, Bemlar) is a ruthless alien reptile-like monster. First appearing in the Season 1 episode "Monster of the Blue Sphere", Bemular escaped its transfer to the Monster Graveyard. After retreating from a battle on a rocky alien planet, Bemular was confronted by Godzilla, Ultraman, and Mebius on Earth where it was then defeated by the combined might of the trio.

Escaping from the Monster Graveyard, Bemular was pursued by Ultraman Mebius throughout space. Bemular lands on a desert-like planet to do battle against Mebius.

The two giants fight to a standstill where it seems Mebius gets the upper hand until Bemular defeats the young Ultra Warrior and flies to the Earth.

Monster of the Blue Sphere[]

On a rocky, red, desert planet, Mebius battles the powerful, green alien reptile kaiju to a standstill, only for him to be defeated by the monster and Bemular escapes. Mebius then chases him in hot pursuit across the universe and all the way to Earth.

Bemular finally made his arrival to Earth and landed in a lake, where he was then confronted on the shores by Godzilla. As the two proved evenly matched, Bemular had the Monster King in defeat until it was in the presence of the original Ultraman. The red and silver giant appeared to fight against Bemlar. After a long and brutal fight, Ultraman was also in defeat until Mebius appeared to help.

Then the trio all fought and defeated Bemular together, using their combined strength and beams of energy to destroy Bemular as it was trying to escape again.

Being a reptile-like alien monster, Bemular has very swampy-green scaly skin and has spikes coming out of his head all the way down to his tail. He also has small arms.

Bemular's roar is a modified Godzilla roar. It is the roar in reverse and fades into the original roar at a higher pitch and it sounds mechanical.

Despite his appearance, Bemular is a rather powerful, ruthless alien reptilian monster, strong enough to fight Ultraman, Ultraman Mebius, and even Godzilla to a standstill. It took the combined might of all three of them to defeat him.

After being resurrected by Geronimon, Bemular was endowed with new powers and abilities in addition to retaining his previous ones. 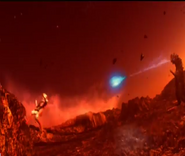