Birdon (バードン, Baadon) is a powerful turkey/rooster-like kaiju. Birdon appeared in 3 episodes of Season 1, entitled "The Ultra-Killer". Upon her escape from her volcanic prison in Mount Mihara from which she had been trapped in for millions of years, Birdon was confronted by Mebius, Zoffy, and Godzilla.

However, even the might of the King of the Monsters alone failed to stop the bird monster. Birdon escaped and continued its rampage throughout Tokyo as well as looking for a place to lay her eggs. In the end, Birdon was defeated by the combined efforts of Godzilla, Gomora, Mebius, Zoffy, and Taroh.

Locked in Mount Mihara for millions of years, Birdon was a powerful bird-like kaiju that became the last of her kind. One night, a lightning strike triggered an explosion and the bird monster escaped its tomb.

Birdon appeared in 3 episodes of Season One. This makes Birdon something of a recurring monster in the series.

In Birdon Awakens, sealed away in a volcano for millions of years, Birdon emerged from the ground, beckoning her return. After being released, Birdon took off in search of food, which instinctively was a stray Sabora.

Birdon was soon met by Ultraman Mebius and used her immense power to beat down the young Ultra. Birdon injected Mebius with a strong poison with her beak. Weakened and poisoned, Mebius was forced back into his human form as Birdon almost took off into the sky until the giant bird was blasted with a neo-blue energy beam.

As Birdon crashed to the ground, Godzilla finally arrived on the scene. The King of the Monsters fought the Volcano Bird Monster to a standstill, as they proved evenly match and neither could overpower the other. That is until Birdon stabbed Godzilla with her beak and pumped the Monster King with poison. However, Godzilla somehow tore out Birdon's beak and then assaulted the giant flier.

Godzilla almost had Birdon in defeat, but he collapsed and fell into a coma. With the Monster King fallen, Birdon used this chance to escape. She then began attacking nearby buildings in search of food and a place to lay her eggs, marking the city as her own territory.

In Taro and Zoffy Die, once in the city of Tokyo, Birdon was confronted by Ultraman Taro.

Birdon saw Ultraman Taro as a threat to his "territory" and attacked him instead, stabbing Taro repeatedly all over his body with her sharp beak, until Ultraman Taro shockingly died of his injuries. With Taro out of commission but inedible to the massive bird, Birdon took off to return to her volcanic nest, leaving the city devastated over Ultraman Taro's death.

Suddenly another Ultraman, Zoffy, soon arrived to fight Birdon to avenge Taro. However, despite Zoffy's experience, Birdon fought back, lighting Zoffy’s head on fire with her flames and continuously stabbing him like with Taro until he killed Zoffy too! Tired from the fighting, Birdon returned to the volcano, this time leaving Zoffy’s dead body in his wake. Now with Zoffy and Taro both dead, Birdon resumed her diet of humans as it seemed now nothing could stop her ancient might.

In Only One Life, Birdon soon attacked another city in search of food, attacking an apartment building. Ultraman Mebius and Taroh both returned to save humanity but they were still weak. The poison had not completely worn off in Mebius and Taroh hadn't fully recovered.

Soon, Rei appeared and released Gomora. Birdon continued to use hurricane winds and her beak to stab Gomora. Eventually, Birdon was overpowered when Gomora caught her by her beak and struck point-blank at her head with his tail. Birdon struck Gomora with his flames and then laid eyes upon the Mother of Ultra, who revived Ultraman Taro and was trying to wake up Godzilla from his coma.

As the Mother of Ultra was moved aside, Birdon almost stabbed her beak into her until it was caught in the palm of Godzilla's hand. Teaming up with one another, Godzilla, Gomora, Mebius, Taro, and Zoffy were all able to overcome Birdon's immense strength.

Eventually, as the Mother of Ultra was watching, Godzilla defeated Birdon with his Super Atomic Ray and the bird monster crashed into the volcano and she fell deep into its recesses as another eruption sealed Birdon back inside her prison. With Birdon gone for good, Zoffy's body was recovered and taken back to Nebula M78 to be revived as well.

Birdon is essentially like a giant turkey or rooster, hence her bird-like appearance. She has a large beak, red sacs on both sides, feathered-legs, and yellow wing membranes with a bit of blue on them.

As a prehistoric bird-like kaiju, Birdon is one of the oldest known monsters. She is an incredibly powerful beast, as it took the combined strength of Godzilla, Gomora, Ultraman Mebius, Ultraman Taro, and Zoffy just to defeat her. This feat makes Birdon one of the most powerful monsters to appear in the series. 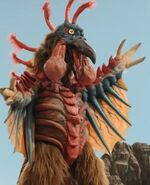