The Birth of Godzilla: King of the Monsters

The Birth of Godzilla: King of the Monsters

Godzillasaurus, often nicknamed Tyrannosaur, is a fictional species of theropod dinosaur native to Lagos Island that first appeared in The Birth of Godzilla: King of the Monsters. The apex predator of the island, this tyrannosaurus-like carnivorous dinosaur transformed into Godzilla during the H-Bomb test in 1954.

As the name suggests, Godzillasaurus, since saurus meaning lizard in Greek, Godzillasaurus would mean either "Godzilla's Lizard" or "Gorilla-Whale Lizard".

Godzillasaurus is different from other theropods because due to its more upright posture and dragging its tail on the ground, akin to older theropod dinosaur reconstructions. However, weighing well over 7 tons, standing around 6 meters in height, and measuring 15 meters in length, it is much larger than any other theropod species, probably due to its erect posture. It has a smaller head than a real theropod, and has a double row of teeth, much like a shark.

The roar for Godzillasaurus are the 1976 version of King Kong. Additionally, most of Godzillasaurus' roars were "borrowed" from other kaiju: Rodan, extremely slowed down, and Gamera, slightly sped up, when screaming in agony.[1]

Having survived for 65 million years since the extinction of the dinosaurs at the end of the Cretaceous period, Godzillasaurus is the result of Tyrannosaurus rex evolving in the isolated environment of Lagos Island. In that time, these enormous theropod dinosaurs lived on Lagos Island with various other prehistoric creatures, ruling at the top of the food chain on the island as its apex predator.

The Birth of Godzilla: King of the Monsters[]

After the Japanese soldiers paid their respects and left, the dinosaur recovered from its wounds and remained the Islands apex predator. However, ten years later, Godzillasaurus was mutated by nuclear fallout from H-bomb tests performed on a nearby island called Rongerik in the 1950s. As a result, Godzillasaurus subsequently transformed into Godzilla.

Godzillasaurus displayed immense physical prowess. For instance, it was able to tackle with other powerful animals on the island, such as Ceratopsianosaurus, Stegosaurus, and Brontosaurus.

Even before transforming into Godzilla, Godzillasaurus displayed a high amount of strength and endurance. Having a nearly impenetrable hide, small firearms and even rocket launchers were unable to damage him, and only barrages from several battleships were the only things strong enough to draw blood and weaken it. Though it took a lot of damage from the battleships, it still got back up to attack the people on the beach and get away from the beach.

Despite its appearance and size, Godzillasaurus has surprising speed and agility in comparison to its predecessors. In addition, it also possesses a long stride, which can be used in tandem with their footspeed to allow them to cross large distances in a surprisingly quick fashion.

In addition to possessing immense physical strength and stamina. The jaws of the Godzillasaurus are extremely powerful, following the lineage of powerful jaws granted by the Tyrannosaurus rex. The same principles apply to its tooth design, which is akin to a railroad spike in design which, when used in tandem with its powerful bite, could easily prove supremely painful, or outright fatal to its targets. 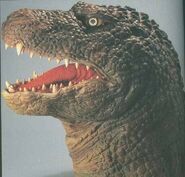 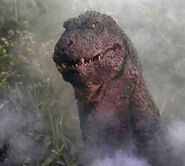