Golza (ゴルザ, Goruza) is an ancient kaiju. A sadistic monster that had awoken from a dormant state of thousands of years, Golza first appeared in the Season 1 episode "Pyramid of Tiga". In the episode, Golza returned in the present day to attack the to-be-revived giants and along with Melba, destroyed all but one of the three statues housing the ancient warriors. After Melba's and Telesdon's defeat at the hands of Godzilla, King Caesar, Gomora, Litra, and Ultraman Tiga, Golza fled.

In the Season 2 episode, "Golza Strikes Back", Golza soon returned as Fire Golza. Having become more powerful than before, Golza was soon captured by Rei's sister Kate and become one of her Reiblood monsters. Kate used Golza to defeat Godzilla, Gomora, and Tiga. However, despite the monsters immense power, Golza was defeated by the trio.

Golza is an ancient, giant kaiju from Earth's past that slaughtered anything in its way, known for being one of the most powerful monsters the world has ever known to be found on Earth. It would return to the world along with the sky-rending kaiju Melba and the tunneling kaiju Telesdon, to plague humanity.

In Pyramid of Tiga, appearing first in Mongolia, Golza tunneled back underground before GDF could react. He later appeared in Japan and causes destruction until he found the Tiga Pyramid of Light.

Just as Melba arrives, both kaiju manage to destroy two of the statues inside the Pyramid. But then Godzilla and King Caesar show up and fight the two. The situation worsened when the commotion attracted the returning kaiju Telesdon, whom had returned to finish off Godzilla.

The kaiju closed in on the Defenders, Rei returned to aid The Monster King, releasing both Gomora and Litra to battle the kaiju, fortunately Gomora manages to destroy them both with his Oscillatory Wave and at the same time, Ultraman Tiga is reborn and fights both Golza and Melba with little effort. After transforming into Power-Type and with help Godzilla, Tiga breaks Golza's ankle, forcing the kaiju to flee into the Earth, while Tiga finishes off Melba.

In Golza Strikes Back, Golza was discovered hiding underground beside a volcano which was threatening to erupt. After absorbing so much heat from the lava, He had developed new powers and strength, as well as red markings that covered its body, becoming known as Fire Golza. Fire Golza rose from the ground and one night, stumbles upon a group of eight Sadola, killing them all with ease. Eventually, an evil female Reionyx named Kate, Rei's evil older sister, was amazed by the Monsters strength and took it as her Reionyx monster.

As GDF went into the volcano to investigate (with the weaponized vehicles outside waiting in case a kaiju was attacking,) Fire Golza was released once again and made his way to the surface rampaging once again, without nothing that the GDF could do to stop it. However, Golza spots Godzilla at the top of Mount Fuji and Kate sends him to destroy the Monster King. However, the two proved evenly matched until Golza fired all its power onto Godzilla.

Before the Monster King could be killed, Rei appeared and summoned Gomora, but Fire Golza proved to be superior in strength and dominated Gomora for the majority of the fight. Daigo quickly turned into Ultraman Tiga, however Powered-Up Golza's improved strength and absorption abilities proved to be too much for Tiga to handle. Even in Power Type their strength was matched, but Golza's absorption abilities were still a problem. As a result, Tiga then combined his physical attacks with his energy attacks to finally get an advantage over the kaiju, which worked and allowed Tiga to use the Zepellion Ray and defeated Fire Golza. With the assistance of GDF, Godzilla, and Tiga, Gomora managed to ambush Fire Golza, turning the battle to his favor and Godizlla mortally wounded Fire Golza with his Spiral Beam.

Kate then confronted Rei, greeting her brother and her second kaiju, Gan-Q, to finish the match. Luckily, Gomora avoided Gan-Q's attack and Fire Golza took Gan Q's attack by surprise and is quickly destroyed in the process.

As a prehistoric giant from Earth's past, Golza is one of the most powerful Kaiju the world has ever known to be found on Earth, capable of slaughtering just about anything in his way.

After retreating from the original battle against Godzilla, the horrible Golza found a new home under the Earth. Thriving in the super-hot environment beneath Mount Fuji and taking daily bathes in lava, the ancient monster grew in strength and power, becoming Fire Golza. This new form of Golza was far more powerful than the original. In this form, Golza is so incredibly powerful that it took the combined efforts of Godzilla, Gomora, and Ultraman Tiga to stop him. 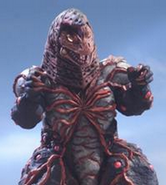