Gomora (ゴモラ, Gomora) is an ancient dinosaur-like kaiju known as Gemolasaurus. Often referred to as the "Crown Prince of the Monsters", he is immensely powerful, thus being one of the toughest and most powerful monsters in the series. He is portrayed as a comrade and ally to the respective protagonist of the series, Godzilla.

According to myth, Gomora is a powerful, ancient dinosaur-like kaiju that was named Gemolasaurus. It had existed on the Earth millions of years ago. When the dinosaurs died out, Gemolasaurus had evolved to live underground and survived extinction.

When Godzilla arrived on the Monster Island Lawless Zone and battled Red King to a standstill, he was almost defeated until Gomora appeared out the mountain side and fought Red King.

Gomora, being stronger than Red King, had the upperhand and eventually weakened and defeated Red King with his Energy Wave Blasters and Lightning Bolt, defeating the King of the Monster Lawless Zone, with help from Godzilla.

Then after Godzilla thanked Gomora for his help, the Monster King went back to Monster Island and then an alien being called a Reioenyx named Rei came to Earth and was beyond more than impressed with Gomora and his abilities. So Rei made Gomora his first monster and summoned him in his Battlenizer.

Being an ancient kaiju, Gomora has the appearance of a dinosaur. He has a nasal horn on his nose and moon-shaped crests on top of his head. He also has a very long tail.

Although Gomora is a simple earthly kaiju, he does have some of the powers that other kaiju have. When Gomora first appeared, he had a major variety of energy power attacks at its disposal and also has extraordinary strength that can rival an Ultraman. When in Rei's Battle Nizer, Gomora (as with all Battlenizer kaiju) gained a new finishing attack, becoming one of the most powerful monsters to appear. Here are Gomora's powers and techniques:

Gomora originally possessed a variety of supernatural powers and energy attacks at its disposal, and also has extraordinary strength that can rival even an Ultra. After becoming a Battle Nizer monster, Gomora seemed to be much stronger than he originally was, and was able to use energy attacks.

Reionyx Burst Gomora is an evolved that Gomora owns via a Reionyx, created when his master, Rei, gives into their Rayblood nature as well as their rage. In the beginning, Rei began to experiences mental burst of rage and adrenaline that drives him and Gomora into fighting. These anger outbursts had Gomora worried about his partner, which lead to his evolution into Burst Mode. At first, Gomora was unable to control himself like his master, Rei, but after GDF saved Rei from his evil nature, Gomora was able to save Rei as well.

EX Gomora is a more powerful form of Gomora that first appeared. It gains a new set of powers. 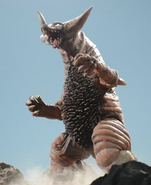 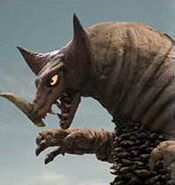 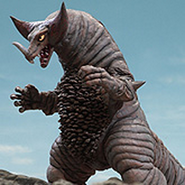