In ancient times, Gudon actively hunted other monsters , slashing his prey with whip-like arms and feeding on their flesh, including their favorite prey: Twin Tail.

An ancient kaiju having been around since the time of the dinosaurs, Gudon is terrible, predatory monster of Earth and, without a doubt, one of the most formidable monsters to ever roam the ancient world. Gudon is a force to be reckoned with, slaying his prey with whip-like arms and feeding on their flesh.

Gudon is light brown or pail tan in color and has two, long black whips and two black horns on his head. He also has spikes on his arms, legs, and all the way down from his back to his tail. 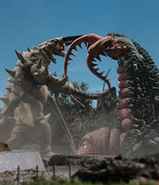 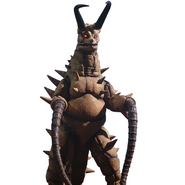 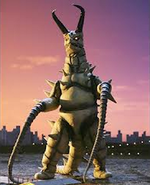 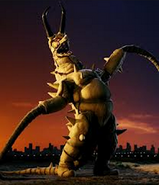