The Son of Godzilla

Kamacuras (カマキラス, Kamakirasu) is a giant praying mantis kaiju. First appeared in The Son of Godzilla, they have become a recurring monster in the saga.

The Alpha is a larger, faster, and stronger species. Sporting a blueish-green all over its body and red over its scythes and spikes as well as yellow eyes, the Alpha has four insect wings that give it flight and instead of having whiskers it has antennae.

The body is clearly segmented and has spikes on its back. This design also dropped the long mosquito-like mouth in favor of a much shorter ant-like one. Kamacuras retains its 6 limbs, with the front ones being scythes and the two pairs of rear ones sustaining its weight.

The Drones are the workers and soldiers, going out to find food not only for themselves but for their Alpha as well. They are red in color, have big, round yellow buggy eyes, long mouths, some 'whiskers', and six legs.

Their front legs are similar to scythes with saw-like spikes. Their four rear legs enable them to walk. Their bodies are segmented and they have an abdomen. They have a purple- and brown-like color to them, similar to Destoroyah.

Kamacuras' roar is actually the screech of Ebirah, only sped up.

Godzilla: Battle of the Kings[]

Mothra I: Godzilla Against Mothra[]

As a giant mantis, Kamacuras has all the natural abilities a normal praying mantis would have, such as flight and spiked claws.

However, the Alpha Kamacuras is shown with a new deadly ability: the power to alter its natural color, thus allowing Kamacuras to camouflage and blend in with its surroundings, waiting to ambush its unwary opponent. 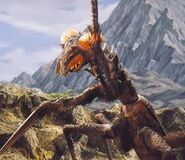