King Joe (キングジョー, Kingu Jō) is a powerful alien robotic titan and one of the most deadly weapons ever conceived, created specifically for the purpose of slaying monsters, including Godzilla.

A powerful robotic titan, King Joe is one of the most deadly weapons ever conceived.

King Joe Black is more powerful than it previous version.

King Joe in the Night 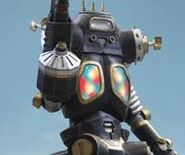