Mothra I: Godzilla Against Mothra

Mothra (モスラ, Mosura), often nicknamed Rainbow Mothra (レインボーモスラ, Reinbō Mosura), is a giant divine moth kaiju. The undisputed Queen of the Monsters, this Mothra first appeared in Mothra I: Godzilla Against Mothra, where she engaged in a battle against Godzilla. Though the two monsters fought relentlessly, the battle came to a draw, with neither being able to defeat the other.

Five years later in Godzilla vs. King Ghidorah, Mothra sought Godzilla's help with the foretold return of King Ghidorah. When the three-headed demonic hydra reappeared, Godzilla and Mothra fought bravely. However, Mothra suffered fatal wounds and died as a result.

The name "Mothra" is the suffixation of "-ra" (a common last syllable in kaiju names) to "moth." Since the Japanese language does not have dental fricatives, it is approximated "Mosura" in Japanese. Originally, Mothra's name was approximated in English as "Mosla," but it was later corrected to "Mothra".

However, in this Mothra's case, her nickname "Rainbow Mothra" comes from the rainbow coloring across her wings.

This Mothra takes on a different form and appearance from other Mothra's.

In her larval form, Mothra is essentially the same as any Mothra's larval form. In Mothra I: Godzilla Against Mothra, after transforming into her imago form, Mothra resembles any Mothra’s imago form but has several distinguishing features. Her wings are somewhat more triangular and have different designs and color schemes. Her abdomen is more rounded and less defined than that of normal Mothra's. She also has green eyes, three beads on her forehead, and feather-like antennae, resembling those of a male moth. Her wings are in color to all of the colors of the rainbow.

In Godzilla vs. King Ghidorah, Mothra's design had partially changed, possibly to indicate she had grown older. She now has a slightly longer but less bulky body, thinner legs, and backward-facing antennae. Mothra's wings are a combination of blue, orange, black, and white rather than all of the colors of the rainbow, and her eyes are blue rather than green.

Mothra's chirps are actually Anguirus's roars sped up. This is most evident during a scene in Godzilla vs. King Ghidorah, where Mothra is hit by King Ghidorah's gravity beams and moans in pain, emitting a sound that is almost identical to Anguirus' roar.

Despite having wrought destruction worthy of any Toho kaiju, Mothra is portrayed as a kind and benevolent creature, causing destruction only when acting as protector to her worshipers on Infant Island or her egg, or as collateral damage, while protecting Earth from a greater threat. Mothra is usually accompanied by two tiny priestesses or fairies (often called Shobijin—Japanese for "small beauties") who also speak for her.

Additionally, this Mothra differs from most of her kind. For one thing, she had parental care for Mothra Larva Prime, risking her own life to save her. Also, unlike most Mothra's, who are usually portrayed as being concerned more for the plights of her homeland and people, this Mothra takes on a more active role as a protector of the Earth.

Rainbow Mothra and her mother were the last remaining members of a highly advanced species of giant moths created as guardians to the Shobijin, an ancient civilization of small yet powerful humanoids far older than humanity.

Mothra I: Godzilla Against Mothra[]

In Mothra I: Godzilla Against Mothra, Mothra first appeared as an egg laid by an aged and weakened elder Mothra in 2007. She hatched during a battle between her mother and Godzilla. Despite being hopelessly outmatched in her larval form, she attacked her mother's aggressor. After a long battle, the two managed to escape, though by that point, Elder Mothra had been badly wounded. Godzilla fired his atomic breath at the larva, only for Elder Mothra to fly in front of the beam, sacrificing herself for her child. Enraged with grief, the larva Mothra crawled to the National Diet Building and encased herself in a cocoon.

As Godzilla rampaged through Tokyo, Mothra emerged from her cocoon in her imago form and flew off to stop Godzilla. Mothra then flew into battle with great speed to attack Godzilla and arrived in a flurry of laser and energy beams. Mothra seemingly proved to be evenly matched for him. Godzilla fired his atomic breath at Mothra, but she avoided the blast, which struck and destroyed the Landmark Tower instead. She flew too quickly for Godzilla to blast her with his atomic beam and she could easily outmaneuver his other melee attacks. She attacked Godzilla with her sharp, deadly claws, and managed to knock him into a building. Thinking he was defeated, she started to fly away, only to be met by another attack.

Godzilla and Mothra continued to attack each other back and forth. At the peak of the battle, Godzilla and Mothra fired their beams of energy at the same time, which caused an explosion sending both monsters flying. Godzilla was seemingly defeated and Mothra arose from the rubble in the city. However, in their moment of victory, Godzilla rose from Tokyo Bay. Rather than continue to fight, Godzilla turned around and went out to sea as Mothra watched. Her job done, Mothra returned to Infant Island.

Five years later, in Godzilla vs. King Ghidorah, when the return of evil three-headed space monster King Ghidorah was near, the Japanese government asked the Shobijin to call Mothra to fight him and will have Kiryu there to help, now having been repaired. The Shobijin remarked that even with Kiryu, Baragon, and King Caesar at her side, having grown old and become physically exhausted after giving birth to an egg, Mothra (while still powerful) will not be enough to stop King Ghidorah, as the monster has grown in power and size while imprisoned.

However, the twin fairies proposed that if she could recruit the help of Godzilla and the monsters of Monster Island, they may have a chance. The Shobijin called Mothra to Monster Island, where she sought out Godzilla and his friends, who were battling Destoroyah. Mothra used her powerful energy attacks against the Precambrian monster. As a result, Destoroyah was defeated and engulfed in an explosion.

Godzilla and Mothra meet for the first time in five years. She informs him of the oncoming threat posed by King Ghidorah. Though hesitant and unwilling at first, Godzilla agrees to help after being convinved by his son. Together, Godzilla and Mothra left Monster Island and ventured to Mount Fuji where the meteor that crash. However, the pair are soon attacked by a number of Kamacuras and Gyaos. After killing off the monsters, Godzilla and Mothra are confronted by Gigan and MechaGodzilla. The four monsters fight to a standstill until Gigan brings Mothra down. While Godzilla is caught in a double-team by the enemy monsters, Zilla and the Earth guardian Baragon to aid him. The monsters continue to fight until somehow, King Ghidorah is awokened.

Mothra tried to fight King Ghidorah, but was simply too old and frail to carry on the fight. The Shobijin reluctantly prayed to the egg, causing it to prematurely hatch into a larva named Mothra Prime. Mothra Prime arrived to assist her mother, but King Ghidorah grabbed the larva with his teeth and bit into her. Godzilla and Mothra rescued the larva and Godzilla created a massive explosion, causing King Ghidorah to be buried. With her enemy neutralized, Mothra carried the larva out over the sea, but her strength failed and she fell into the water. Mothra struggled to stay afloat, as the larva desperately tried to hold her up above the surface, but to no avail. Mothra sank underwater and drowned, leaving the larva to carry on her legacy and stop King Ghidorah. The larva then swam to a remote island to transform into his imago stage and continue the battle.

In her larva form, she has a knack for biting and clinging to foes' tails.

In addition to flying at Mach 3, Mothra's wings can (and generally do) create gales that tear apart forests and rock structures and send other kaiju flying. Her great bulk of a body is commonly used to her advantage in battle to slam into opponents (both in larva and adult form), and her surprising levels of strength can help her to drag and even lift monsters like Ghidorah.

Mothra's powder has a different effect and acts as a cloud of mirror-like scales, which would allow beam weapons to repeatedly rebound before striking the target, effectively making them impossible to miss.

Mothra easily took advantage of this condition to attack Godzilla by repeatedly firing their energy-based attacks, allowing her to strike Godzilla over and over again, with the rebound effect negating any chance of their energy attacks not hitting their target. Ironically, Godzilla's Nuclear Pulse wasn't reflected by her mirror and she was thrown back, possibly because her mirror can't reflect energy attacks if it is able to pass around her mirror. Additionally, Mothra is also able to use her scales multiple times without any loss of her ability to fly.

Mothra emits a Reflective Powder from her wings which can paralyze and cause pain to her opponent. Mothra's powder was able to redirect both energy beams and physical projectiles back to their original senders not only by reflecting them, but she can also use them to attack via her kamikaze attack with which she kills Gigan and survived.

In larva form, Mothra sprays her opponents with a stream of silken web spray from her mouth as a ranged attack to wrap, entrap, disorient, and immobilize an opponent with a multicolored electrical aftershock. 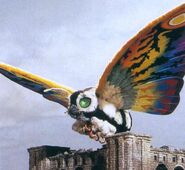