Mothra (モスラ Mosura), also known as the Third Guardian, is a giant divine moth kaiju. The undisputed Queen of the Monsters, this Mothra first appeared in Godzilla vs. King Ghidorah, where she took part in the foretold battle against King Ghidorah in modern times. At the peak of the war, following her mother's death, Mothra grew into her imago stage and aided Godzilla against King Ghidorah. Though both guardian monsters fought bravely, Mothra was brought down. However, she sacrificed herself for Godzilla, endowing him with restored life and power, enough to destroy King Ghidorah.

The name "Mothra" is the suffixation of "-ra" (a common last syllable in kaiju names) to "moth." Since the Japanese language does not have dental fricatives, it is approximated "Mosura" in Japanese. Originally, Mothra's name was approximated in English as "Mosla," but it was later corrected to "Mothra".

Though the largest Mothra to appear in the Saga so far, this Mothra is essentially still the same: a gigantic moth-like creature with brightly-colored wings. She also differs from her mother as well as many of her predecessors. Not only is she larger, but she has a fluffy and soft appearance, looking more like an actual moth. She has bright blue eyes and her wings retain the red, orange, and yellow coloring with black patches on them. This Mothra had been stated to be a direct descendant/reincarnation of the Original Mothra.

Mothra's chirps are actually Anguirus's roars sped up. This is most evident during a scene in Godzilla vs. King Ghidorah, where Mothra is hit by King Ghidorah's gravity beams and moans in pain, emitting a sound that is almost identical to Anguirus' roar.

Despite having wrought destruction worthy of any Toho kaiju, Mothra is portrayed as a kind and benevolent creature, causing destruction only when acting as protector to her worshipers on Infant Island or her egg, or as collateral damage, while protecting Earth from a greater threat. Mothra is usually accompanied by two tiny priestesses or fairies (often called Shobijin—Japanese for "small beauties") who also speak for her.

Additionally, Mothra differs from most of her kind. Unlike most Mothra's, who are usually portrayed as being concerned more for the plights of her homeland and people, this Mothra takes on a more active role as a protector of the Earth. Mothra also appears to be a particularly intelligent kaiju; shown by her various actions such as her immediately coming to Godzilla's aid (despite of what he had done) and her fight against King Ghidorah in a weakened state (which led to her sacrifice and also to her remains enabling Godzilla to defeat King Ghidorah, displaying a seeming capacity for self-sacrifice).

The last and most powerful of the three Guardian Monsters prophesized to stand against King Ghidorah as well as the direct descendant/reincarnation of the "original Mothra" that battled King Ghidorah many millennia ago, this Mothra and her mother, Rainbow Mothra, were the last remaining members of a highly advanced species of giant moths created as guardians to the Elias, an ancient civilization of small yet powerful humanoids far older than humanity.

In Godzilla vs. King Ghidorah, when King Ghidorah's return was near, Mothra first appeared as an egg laid by an aged and weakened Rainbow Mothra in 2012. She hatched prematurely during a battle between the Guardian Monsters and a recently awakened King Ghidorah. Despite being hopelessly outmatched in her larval form, Mothra attacked his mother's aggressor. After a long battle, the two moths managed to escape, while Godzilla pinned King Ghidorah down in a colossal explosion. Though by that point, Rainbow Mothra had been badly wounded and she collapsed into the sea. Despite her best attempts to help her, Mothra could do nothing as she watched her mother sink into the depths. Mothra then retreated to a remote island where she cocooned herself against a 10,000-year-old tree.

A lengthy battle followed as Godzilla and Mothra combined their power against King Ghidorah. While Godzilla was brought down again, Mothra and King Ghidorah clashed in the skies until Mothra was defeated. Things started to look grim for the Mothra and Godzilla until the other guardian monsters, monster island residents, and Kiryu arrived to defeat the Hydra. While King Ghidorah continued his fight against the other monsters, the Shobijin and the Infant Islanders began to pray for Mothra's egg to hatch.  Finally, the egg hatched into two twin larvae. The larvae also arrived in Tokyo to communicate with their mother, but King Ghidorah noticed them. King Ghidorah fired his Gravity Beams at the larvae, only for Godzilla to stand in front of the beam, sacrificing himself for the family. Enraged, the larvae attacked King Ghidorah.

Godzilla was killed and Mothra acted to save the world. Severely wounded and weakened, Mothra flies over to Godzilla, landing on top of his body. Using the last of her strength, Mothra starts to disintegrate, her ashes falling onto Godzilla as she gave her life force and melted into Godzilla, healing his and transferring her power to him. Mothra's life force flowed into Godzilla's body, reviving the King of the Monsters and giving him an advantage in the fight. With Mothra's power, Godzilla destroyed King Ghidorah.

Mothra's stinger is powerful enough to pierce clean through most monsters at close range.

Mothra has immense durability, enough so that she was able to continue fighting throughout her clash with King Ghidorah, despite being half-burned.

Upon dying, Mothra released a cloud of energy that empowered Godzilla following the latter's thermonuclear overload, enabling him to emit smelting heat and release a series of all-devastating thermonuclear pulses.

Mothra's body in her larval form, and later her thorax in her imago form; are capable of emitting beta-wave bioluminescence that can be projected through the patterns of her imago form's wings. She uses this as a form of communication and can weaponize it to create brilliant, near-blinding 'god rays' of blue light or angelic-looking golden-white light. These god-rays are powerful enough to almost-instantly disperse storm-clouds and produce mighty winds.

In addition to flying across the sky at great speeds, Mothra's wings can (and generally do) create gales that tear apart forests and rock structures and send other kaiju flying. Her great bulk of a body is commonly used to her advantage in battle to slam into opponents (both in larva and adult form), and her surprising levels of strength can help her to drag and even lift monsters like Ghidorah.

Mothra is able to shoot poison darts from her abdomen.

Mothra emits a Reflective Powder from her wings which can paralyze and cause pain to her opponent. Mothra's powder was able to redirect both energy beams and physical projectiles back to their original senders not only by reflecting them, but she can also use them to attack via her kamikaze attack with which she kills Gigan and survived.

Mothra can create an invisible force field around her body that is able to deflect most energy beam attacks.

Mothra is able to release rainbow powder from her wings which can reflect energy attacks as well as weaken and cause pain to his opponent. Mothra's powder has a different effect and acts as a cloud of mirror-like scales, which would allow beam weapons to repeatedly rebound before striking the target, effectively making them impossible to miss.

Mothra and Godzilla easily took advantage of this condition to attack King Ghidorah by repeatedly firing their energy-based attacks, allowing them to strike King Ghidorah over and over again, with the rebound effect negating any chance of their energy attacks not hitting their target. Additionally, Mothra is also able to use her scales multiple times without any loss of her ability to fly.

It's indicated that this Mothra had a heightened awareness of the Earth's planetary atmospheric and tectonic/geological interactions and its geological past, which she passes on to Godzilla permanently when her ashes made Godzilla more powerful.

Mothra is a very fast and agile flyer, able to fly at Mach 9.

Mothra's fighting style varies depending on what stage of life she is currently in. In her larval form, she primarily relies on her silk attack, as well as her legs and mandibles as her offensive weapons, but can also cause damage to her surrounding environment (particularly where humans are concerned) sheer size and bulk. In her imago form, Mothra was a fierce enough aerial fighter to match King Ghidorah and keep the latter occupied for a time. 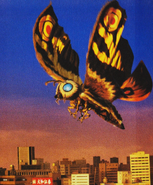