Attack of the Transparent Kaiju

Neronga (ネロンガ, Neronga), also known as the Transparency Kaiju or even the Hollow Monster, is an ancient transparent kaiju that first appeared sleeping beneath a well near Kazumi, only to awaken and go on a feeding rampage but was stopped by Godzilla, King Caesar, Gomora, and Ultraman.

An ancient invisible beast, Neronga fed on electrical power sources for food and energy for thousands, if not, millions of years.

Awoken by man and bellowing in hunger for electrical energy, Neronga emerged from underground and headed for a nearby power plant to drain the energy. Awakening in Okinawa, a woman then awoke Okinawa's Guardian, King Caesar.

Neronga battled against the lion deity. At first, it seemed King Caesar had the upper hand, but when Neronga used his invisibility technique he outsmarted and distracted King Caesar long enough to stun him with his electricity bolts and knock him out unconscious.

The next day, Neronga then appeared in Japan and was confronted by the Monster King, Godzilla. At first, Godzilla appeared to be winning, but Neronga out smated and wounded Godzilla with electricity. Then Rei appeared summoned Gomora to do battle against the monster and it seemed Gomora had the upper hand, but Neronga used his invisibility technique again to try and distract Gomora to kill him.

King Caesar then returned to finish what he started and confronted the transparent monster. King Caesar was able to successfully fight back by absorbing the monster's electric bolts through his own eyes and then reflecting the projectiles back at his adversary. However, Neronga was too smart and used his invisibility. Overpowering King Caesar, Hayata transformed into Ultraman and manhandles the beast, beating him like crazy, but Neronga still fought back.

Before long, Neronga when invisible again and struck all four enemies with his bolts, nearly killing them. Listening closely to Neronga's movements, Rei guided Gomora into attacking the invisible Neronga and successfully destroyed the monster as a result.

As Ultraman cut off Neronga nasal horn and Gomora surged his Oscillatory Wave through the transparent monster, he then tossed Neronga and side and Ultraman, Godzilla, and King Caesar used a combination of their Atomic Beam, Specium Ray, and Fireballs and destroyed the Transparent Monster.

Sometime later when the space stone monster Bullton appeared before Godzilla and his friends, Neronga was revived alongside Dorako and Telesdon. Neronga was the first to charge into battle against Gomora, Litra, and Eleking. When Telesdon fought Litra, he accidentally killed Neronga with his flame breath.

Neronga has physical attributes identical, if not similar, to the monster Baragon. However, he has a lighter/yellow-colored topping and a black body. He has a nasal horn and two rotating horns above his yellow-colored eyes. He also has four tusks coming out from his mouth, two on each side. Additionally, when using his power, Neronga's nasal horn seems to glow with electrical-like attributes.

Neronga's roar is a reused Showa Baragon and Varan roar.

An invisible beast, Neronga is an ancient kaiju that feeds on electrical power sources for food and energy. When he is at full energy, Neronga is a fairly powerful monster. Though he is not overly powerful, it took the combined efforts of Godzilla, Ultraman, King Caesar, and Gomora to finish him off. Should Neronga run low on energy, his abilities will not be very powerful. 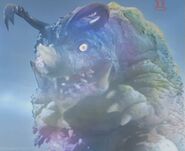 When Neronga was resurrected from the dead, thanks to Geronimon, he gained new powers and abilities in addition to having his own original ones as well as having them enhanced. 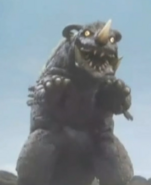 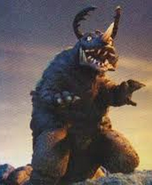