Red King (レッドキング, Reddo Kingu), also known as Redking, is a destructive ancient kaiju who originally appeared on an Island and terrorized any inhabitants it could find.

Red King was once a monster, who live on Lawless Monster zone, He battles Godzilla on his island home, until Gomora came and help Godzilla fighting against Red King, after he was defeated by Godzilla and Gomora, Grande, a mean and selfish Reinoyx appeared and uses him as his last and final Reiblood monster.

Red King sports a large column like neck and dexterous tail. His teeth are jagged and relatively small compared to the two large fangs protruding from his mouth, similar to those of japanese Oni creatures, as well as a large skull dome atop his head. His body is covered in rigid skin that is often compared by fans to a corn cob, however it is extremely durable. Sporting two muscular arms and powerful legs, Red King boasts its formidable size and strength often by showboating and roaring.

The self-proclaimed King of the Lawless Monster Zone, Red King beat down any monster it balled, making him an all-around bully. Red King has been known as the most brutal of monsters, rulling over the land with an iron fist. The brute had earned his dominance over other kaiju, beating down all those that challenged him. Although Red King lacks any supernatural powers, he nevertheless has great physical strength and can hurl boulders with ease. When becoming a Battle Nizer monster, Red King became much stronger than a normal, able to withstand much more punishment.

Later in the series, Red King returned with a new amount of powers he gained via unknown circumstances.

Upon becoming a Battle Nizer monster to Grande, Red King retained all his previous attacks as well as getting a new set of powers, including projectile attacks. This makes Red King more powerful than ever before.

EX Red King is a more powerful form of Red King. It gains a new set of powers and its forearms increase dramatically to almost simian physiology.

Red King about to fire his boulders 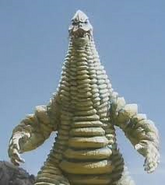 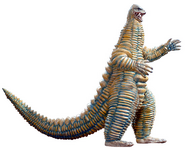