Godzilla vs. SpaceGodzilla: Descendent of The Darkness

SpaceGodzilla (スペースゴジラ, Supēsugojira) is the main antagonist of the series and an extremely powerful, extraterrestrial crystalline, heavily-modified Godzilla clone kaiju. Bent on killing Godzilla and all his kind, SpaceGodzilla arrived on Earth decades ago and tried to destroy Godzilla and his mother, only for him to be defeated and driven away by the Female Godzilla. Decades later, SpaceGodzilla returned to finish what he started. Aided by Gigan, SpaceGodzilla once again battled Godzilla, whom was aided by Kiryu. However, the space monster was eventually defeated by the Monster King, whom trapped SpaceGodzilla in a worm hole.

In the series, Ultraman Hikari hypothesize that the Female Godzilla cells somehow cast into space fell into a black hole and mutated into a partially crystalline life form, which then came out from a white hole. It is not known for certain what caused the Godzilla cells to fall into the black hole.

Godzilla vs. SpaceGodzilla: Descendent of The Darkness[]

SpaceGodzilla appears in the Season 3 finale.

As Godzilla's opposite and evil counterpart, SpaceGodzilla is a highly aggressive extraterrestrial beasty creature hell-bent on killing Godzilla. He is said to be tougher and smarter than Godzilla and appears without any special fanfare. SpaceGodzilla is a malevolent fusion of Godzilla's DNA and an unknown collection of extra-terrestrial minerals and energies. SpaceGodzilla's greatest weapon is the fact that despite his gargantuan frame he possesses human-level intelligence, which makes him a tremendously dangerous threat to all humanity and all of the earth.

SpaceGodzilla is also among the most intelligent of Godzilla's foes in the series, exhibiting displays of planned combat strategy throughout the series (harvesting power from buildings, trapping Godzilla's friends, etc.). This is further evidenced by the fact SpaceGodzilla sought to dominate the Earth of his own free will, instead of other monsters, which only cause random destruction, and only involvement in world domination is to carry out their masters' will.

Unlike Godzilla, who is depicted as a force of nature, SpaceGodzilla appears to have an element of true malice, as the monster was said by the Cosmos to be headed to Earth for the purpose of defeating Godzilla. According to the Cosmos, SpaceGodzilla intended to kill Godzilla so that the Earth would be defenseless when he dominated it.

Space Godzilla has an unknown potential for psychic abilities: including telekinesis, telepathy, levitation, mind control, and the manipulation of many basic elements. Space Godzilla can temper crystal towers from the earth around him, which he uses to magnify and focus his psychic energies. Space Godzilla's greatest weapon is the fact that despite his gargantuan frame he possesses human-level intelligence. This makes him a tremendous potential threat to all humanity and all of the earth. All of this makes SpaceGodzilla among the most powerful monsters in the series. 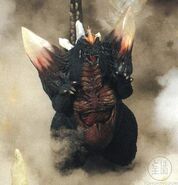 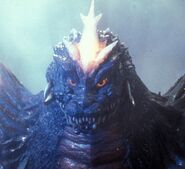 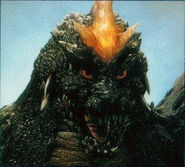 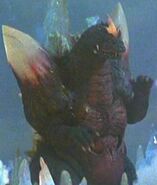 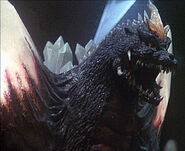