Telesdon (テレスドン - Teresudon) is a carnosaurian worm-like monster that was controlled by The Underground People to attack the surface. It first appeared in the "Monsterous Pilot", thus making him Godzilla's first opponent in the series.

In his first appearance, Telesdon arose from the underground, killed a Telesdon, and caused mayhem across Tokyo. However, he was defeated and driven away by the combined efforts of Godzilla and Anguirus.

Since then, Telesdon became a recurring monster villain in the first season of the series, reappearing to aid Golza and Melba against Ultraman Tiga. However, the worm-like monster was defeated once again.

Telesdon appeared in several episodes throughout the series, making him a recurring villain.

One day, Telesdon emerged from the Earth. Also appearing was a stray Sadora and shortly after the two monsters battled to a standstill. Their fight, however, ended with Telesdon being victorious, killing the lone Sadora with a single blast of his flames.

The next day, Telesdon appeared again and Anguirus arrived to stop him. As the giants fought, Anguirus and Telesdon proved evenly matched until the giant underground monster almost choked the giant ankylosaurus to death, but Godzilla appeared in time to help. So Anguirus and Godzilla defeated Telesdon together, but the giant worm monster got away and burrowed away, escaped the wrath of the duo.

In a later episode during Golza's and Melba's attack on the Tiga Pyramid, Telesdon returned having escaped the fight with Godzilla and Anguirus, and the monster closed in on the Monster King dangerously. Luckily, Rei arrived on the scene and sent Gomora and Litra both to deal with the worm monster. As Godzilla and Tiga distracted Golza and King Caesar fought Melba, Gomora and Litra battled with Telelsdon and Gomora and Telesodon ended up in a beam battle with Telesdon's flames and Gomora's Oscillatory Ray. Ultimately, Telesdon was overpowered and killed by Gomora's ray.

Telesdon has the appearance of a giant dinosaur but with more Earth worm-like features, hence his burrowing abilities. He has light yellow eyes that also appeared to glow in the dark and has a kind of beak-like mouth.

Telesdon is a mighty, massive, super monstrous kaiju, powerful enough to kill a Sadora. Though he is not an overly powerful monster, it took both Godzilla and Anguirus to drive him away.

When resurrected from the dead via Geronimon, Telesdon gained new powers and abilities, in addition to retaining his original ones as well as having them enhanced. He was also granted a frill that gave him extra powers. 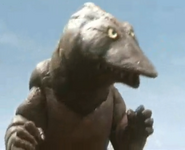