Zilla Junior was the last surviving offspring of the Original Zilla from 1998. He, as well as all of his siblings, were eggs laid inside the Madison Square Garden by Zilla. Unlike his siblings, Zilla Junior survived the bombing of the Madison Square Garden and was later found by Godzilla, who kept him safe from danger but also kept him a secret from the rest of the world, even from the other residents of Monster Island.

Zilla Junior is very different from his late father. Unlike his late father, who reproduced asexually, Zilla Junior is sterile. In the episode "End Of The Line", however, he falls in love with a mutant Komodo dragon, named Komodithrax, and becomes surrogate father to her unborn offspring. Unfortunately for Zilla Junior, Komodithrax and the giant egg she laid fell down a crack in the ice and supposedly dies at the end of the episode. Zilla Junior is also much more aggressive than his parent; rather than fleeing from an attack, he will usually, like Godzilla, fight or destroy his attackers. For a mutation, he is very intelligent and shows the ability to make "moral decisions".

Zilla Junior also shows some planning and strategy in his fighting style, though it is shown that he can resort sheerly to brute force, if he is angered enough. He has even shown a sense of humor, (much like Godzilla) as in the climax of one episode of the series, he splashed members of the Earth Defenders with water in a playful fashion.

His most prominent trait, though, is his protectiveness and loyalty towards Godzilla. When Godzilla is journeying around the world, Zilla Junior is never far behind. The proof of this is that Zilla Junior has often saved Godzilla and other members of the Earth Defenders from dangerous situations. In one situation in particular, Zilla Junior managed to catch Rodan (who was falling) on top of his head before letting him down gently. The only time Zilla Junior's loyalty faltered was during his time with Komodithrax - during which he actively chased the others away.

Zilla Junior has the exact same appearance of his late father, however, standing close to 300 feet (91.5 m) tall and measuring almost 600 feet (183 m) in length, he is considerably larger. Physically, Zilla Junior looks like, if not, resembles a giant-sized, flesh-eating dromaeosaur of some sort, with some inspiration from iguanas and of a Tyrannosaurus. He has three rows of curved scutes on its back, a large rectangular head, thin but powerful legs, and a multicolored body that gives it camouflage in an urban environment. He has a rough, square-shaped underbite, a long neck, large, fin-shaped scutes (which differ greatly from Godzilla's maple leaf-shaped dorsal plates), and long, powerful legs and arms. He also possesses a seemingly vestigial toe, on the back of, and three dinosaur-like toes on the front of each of its feet.

Generally regarded as the most powerful mutant on Earth, Zilla Junior possesses a variety of powers and skills that set him apart from his monster enemies and even from Zilla. For one thing, Zilla Junior is considerably smarter, larger, even stronger, faster, and more powerful than his parent. Zilla Junior retains his parent's speed and agility but gains impressive resistance to damage and healing capabilities.

Zilla Junior is generally considered to be the most powerful mutant kaiju in the series, though he still has a number of exploitable weaknesses.

In the episode "End Of The Line", Zilla Junior falls in love with a mutant Komodo dragon, named Komodithrax, and becomes the surrogate father to her unborn offspring. 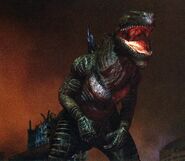