Zoa Muruchi (ムルチ, Zoa Muruchi) is a violent alien fish-like kaiju. The missing link between fish and animal, it first premiered the Season 4 episode "Battle of the Ocean" as the kaiju servant to the monster Daragha.

Godzilla: King of the Monsters The Series[]

In the Season 4 episode "Battle of the Ocean", confronting the Monster King underwater with Godzilla and his swimming allies were fighting Dagarha and his allies, Zoa Muruchi was attracted by a fight and joined Dagarha. Threatened by the imposing monster, Rei sent out Eleking to battle it, as his primary monster Gomora was not as adept at fighting underwater.

Despite his appearance, Zoa Muruchi is a rather powerful monster in his own right. Eleking is all it takes to stop him. 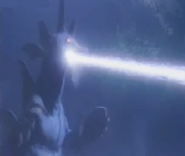 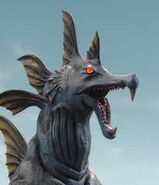